As part of the Attleboro Y’s 150th anniversary year, we plan to celebrate a different era of our Y’s history each month. Throughout April, we’re focusing specifically on the Y’s initial years as an organization founded by 11 men that quickly grew to influence a generation of young men. 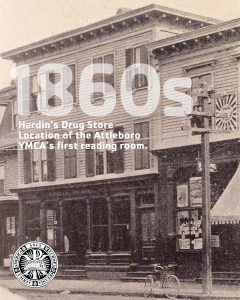 In October of 1867, a group of 11 men gathered in a room inside the Methodist Church on North Main Street in Attleboro.

Outside the church walls, the then sprawling town of Attleboro and the entire United States were experiencing an era of transition. The nation was still reeling from the Civil War and navigating the tenuous peace of Reconstruction. With the Industrial Revolution in full swing, Americans were adapting to the new values and daily realities that came with great societal change. In Attleboro, the town’s industries were growing. Factories were built alongside farms. Farming families became factory workers.

This group of 11 Attleboro men founded a local chapter of the Young Men’s Christian Association in response to the changes occurring within their community. They aimed to create a refuge of prayer and Bible study for young men who wanted to escape the negative influences of this new society. 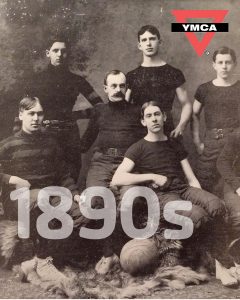 Because they worked to address the needs of men of all social classes, the Association grew rapidly. In 1868, they established a reading room in rented quarters at the rear of 37 Park Street. In 1888, the Attleboro YMCA was chartered and a lot on County Street was purchased for its first building.

Very early in its existence, the YMCA of Attleboro focused on the plight of the “Working Boy” – young boys and teens employed by local factories. In addition to religious instruction, the Y offered educational classes and practical talks. Very early on, the Y’s leaders emphasized physical activity as a critical component of a healthy lifestyle for the working boys. So it’s not surprising that soon after James Naismith invented the game of basketball in 1891, the Attleboro Y was fielding its own basketball team, pictured here.

To learn more about how you can be a part of the 150th celebration this year, go to attleboroymca.org/150years.